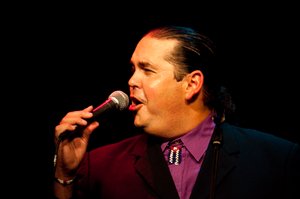 As the son of a Cuban mother and Venezuelan father,

he spent the first 7 years of his life in Cuba,

and then moved to Venezuela with the family.

Here he grew up with the Venezuelan folk music tradition, became a virtuoso on the Cuatro as well as picking up basically all of the countries popular folk songs, which made him

a popular entertainer already as a teenager, where his exceptionally beautiful voice and enormous repertoire

soon led to fame far beyond his village.

18 years old, he moved back to Cuba to begin medical school, and was very quickly sucked into the flourishing musical environment in Habana, and before long he was discovered

by Mirtha Medina, one of Cubans most famous entertainers, who couldn't resist his charm and notorious stage personality.

He toured with her famous cabaret show for a couple of years, and when Mirtha Medina decided to move to the US,

on a worldwide basis with its amazing stage show combined with great songs and musicians.

in Berlin, Germany, and decided to give up the hectic life

of touring and dedicate his time to his daughter.

In 2002 he moved to Denmark, from where he has continued his professional career as lead-singer and special guest star

Via Artis Konsort (DK), The Walter Project (DK), The Antonelli Orchestra "Vild med dans" (DK) as well as being a popular guest with the Danish Radio Big Band and frequently singing in Norway with Norwegian band leader KK and his different latin jazz projects with quartet or big-band.